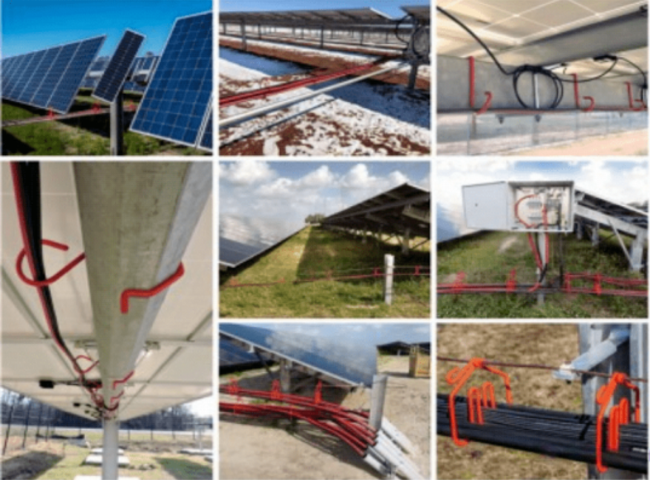 The cable according to the system of the photovoltaic power plant can be divided into DC cable and AC cable, according to the use and use of different environments are classified as follows.

(1) Series cables between modules and components.

(2) Parallel cables between strings and between their strings to the DC distribution box (sink box).

(3) Cable between the DC distribution box to the inverter.

All the above cables are DC cables, which are laid outdoors more often and need to be moisture-proof, sunlight-proof, cold-resistant, heat-resistant, UV-resistant, and in some special environments, acid and alkali-resistant chemicals.

(2) Connection cable from the step-up transformer to the power distribution unit.

(3) Connection cable from distribution unit to grid or user.

This part of the cable is an AC load cable, the indoor environment laying more, can be selected by the general power cable selection requirements.

In photovoltaic power stations with numerous DC cables to be laid outdoors and in harsh environmental conditions, the cable material should be based on resistance to ultraviolet light, ozone, severe temperature changes, and chemical erosion. Long-term use of cables made of common materials in this environment will result in fragile cable sheaths and even the decomposition of the cable insulation layer. These conditions will directly damage the cable system, but also increase the risk of cable short-circuit, and in the medium and long term, the possibility of fire or personal injury is also higher, greatly affecting the service life of the system. Therefore, it is necessary to use PV-specific cables and components in PV power plants. PV-specific cables and components not only have the best weather resistance, and UV and ozone erosion resistance, but also can withstand a greater range of temperature variations.

(1) The voltage withstand value of the cable should be greater than the maximum voltage of the system. Such as 380V output AC cable, to elect the 450/750V cable.

(2) For connections within and between PV arrays, the rated current of the selected cable is 1.56 times the maximum continuous current in the cable obtained from the calculation.

(3) For the connection of AC loads, the selected cable current rating is 1.25 times the maximum continuous current in the calculated cable.

(4) For the connection of the inverter, the selected cable current rating is 1.25 times the maximum continuous current in the calculated cable.

(5) Consider the effect of temperature on the performance of the cable. The higher the temperature, the lower the load capacity of the cable and the cable should be installed in a ventilated heat sink as much as possible.

(6) Consider the voltage drop should not exceed 2%.

DC circuits are often affected by a variety of adverse factors in operation and cause grounding, making the system not operate properly. Such as extrusion, poor cable manufacturing, insulation material failure, low insulation performance, DC system insulation aging, or the existence of certain damage defects that can cause grounding or become a grounding potential. In addition, the outdoor environment of small animal intrusion or bites can also cause DC grounding faults. So in this case generally use armored, with rodent-proof agent function sheath cable.

If the cable length is greater than 50 meters, please refer to the larger size cable.

1. Cable laying mode according to the engineering situation, environmental conditions and cable specifications, quantity, and other factors to consider, and according to meet the requirements of reliable operation, easy maintenance, and technical and economic principles to choose a reason. PV power generation project DC cable laying mainly has direct burial sand mat brick laying, laying through the pipe, laying in the slotted frame, cable trench laying, tunnel laying, etc.

The laying of AC cables does not differ much from the general power system laying method. DC cable is mostly used between PV modules, between string to DC sink box, and between sink box to the inverter, its cross-sectional area is small and large, usually, the cable is tied along the module bracket or buried directly through the pipe for laying, DC cable in laying generally need to consider.

(2) Cable laying force should be uniform and appropriate, and should not be too tight, photovoltaic sites generally have a large temperature difference between day and night, and should avoid thermal expansion and contraction caused by cable fracture.

(3) In the building surface of the photovoltaic material cable leads, to consider the overall beauty of the building, laying position should avoid laying cables in the sharp edges of walls and brackets, so as not to cut, grind damage the insulation layer caused by a short circuit, or by shear force cut wire caused by a break. At the same time consider cable lines by direct lightning and other issues.

(4) Reasonable planning of cable laying path, reducing cross, as far as possible, combined laying to reduce the amount of excavation during the construction of the project and the amount of cable.

2. Cable connection DC cables in photovoltaic power generation systems are mostly laid outdoors, the connection method is mainly joint plugging, which can be protected by wearing a tube, using the module support as a cable laying channel, and fixed to reduce the impact of environmental factors. Other cable connections and general power systems in the cable connection are roughly the same.