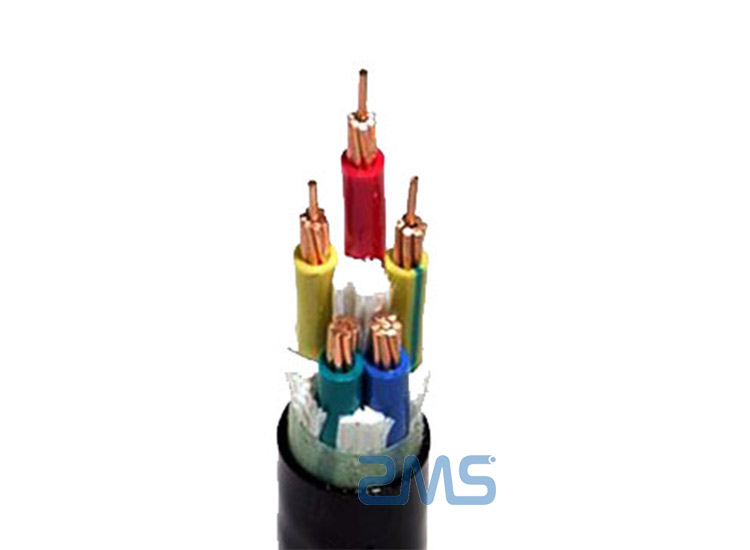 Ⅰ. The Difference Between XLPE Cable and PVC Cable

1. Low-voltage cross-linked (XLPE) cable has developed rapidly since it was put into application in the mid-1990s, and now it has half of the market share with polyvinyl chloride (PVC) cable each. Cross-linked cables compared with PVC cables, have higher load capacity, overload capacity, and longer service life (PVC cables in a better environment when the thermal life is generally 20 years, while XLPE cable thermal life is generally 40 years). The superiority of cross-linked cables is increasingly recognized by the design and use of the sector.

2. Ordinary PVC wire and cable (insulation and sheathing) burning delayed combustion quickly, fueling the fire, 1 ~ 2min that the loss of power supply capacity. Its burning decomposition of the release of black smoke can reach the level of invisible, causing breathing and evacuation difficulties. More serious is that PVC burning will decompose and release hydrogen chloride (HCL) and dioxins and other highly toxic corrosive halogen gases. This is the main cause of death in the fire (80% of the fire death factor), and diluting hydrochloric acid conductive electrical film attached to electrical equipment, seriously reduces the insulation performance of equipment, the formation of secondary disasters difficult to remove.

d. The amount of toxic gas produced by combustion is only 1/3 of that of non-flame-retardant products.

Halogen-free low-smoke wire and cable should have halogen-free, low smoke and flame retardant performance. Its indicators are.

Mineral insulated fire-resistant cables are non-combustible, smoke-free, corrosion-resistant, non-toxic and impact-resistant, spray-resistant properties, known as fire-resistant cables. Fire performance in the fire-resistant wire and cable varieties is most prominent, but the manufacturing process is more complex and more expensive, manufacturing length is limited, bending radius is large, and insulation is susceptible to moisture. Cross-sectional 25mm2 and above specifications are currently only available as single-core products, which must use permanent special terminals and intermediate couplers and are more complicated to install and construct.

Ⅲ. The Construction of New Products with Wire and Cable

From a technical point of view, the environmentally friendly cable is a higher stage of wire and cable products, in line with the trend of the times and development trends. Upon its introduction is widely valued, Europe, the United States, Japan, and other developed countries have developed a series of product production and application standards, vigorously promoting the application.

The characteristics of environmentally friendly cables are

a. Halogen, combustion does not produce harmful gases or corrosive gases.

b. Low smoke emission when burning.

d. With lead and other heavy metals, no environmental hormones, no soil pollution.

e. It can be reused.

International traditional building wiring with wire is divided into two categories: a class of polyvinyl chloride wire, mainly in Europe, Japan, China, Australia, etc. Another category to the United States, and North American countries as representatives, mainly using polyvinyl chloride insulation nylon sheathed wire. It should be noted that the application of nylon sheathed wire in the United States is the development and evolution of polyvinyl chloride wire, which has a history of nearly four decades, with a market share of up to 90% in previous years.

Nylon has a soft armor, compared with polyvinyl chloride wire, superior mechanical properties, heat resistance, chemical stability, resistance to tension, and wear resistance is outstanding; compared with BYJ wire, BVN wire is usually more expensive, containing halogen, the cost performance is at a disadvantage. It should be noted that the United States is currently strongly opposed to the application of PVC, BVN applications will be significantly reduced.

Prefabricated branch cable was developed by Japan, the mid-1990s began to introduce China. In just a few years, some domestic manufacturers have mastered and solved the relevant key technologies and manufacturing processes, product performance and quality has reached international standards, and has been widely used in construction projects. Compared with the plug-in bus bar, the insulation, waterproof, seismic, branch reliability, and economic index of prefabricated branch cable are very outstanding. It is especially suitable for a trunked distribution system with a more stable load, and the application prospect of construction engineering is very broad.

Research results show that rats gnaw wire and cable not only to grind their teeth but as part of feeding. In the southern region of humid places, cable suffers from termite damage cases gradually increased. Building engineering wire and cable anti-rodent, anti-termites hazard work should not be ignored.

In conclusion, this article has introduced the advantages and disadvantages of each XLPE and PVC. You should also check the various industry standards when selecting wire and cable for your application. ZMS cable offers a wide range of XLPE cables and PVC cables at the best prices in the industry.