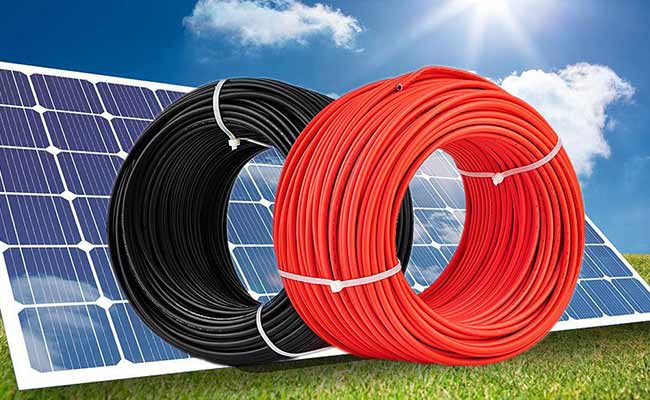 There are many varieties of photovoltaic cables, and what we usually call photovoltaic cable refers to the comprehensive cable products based on solar panels, various types of cable fittings, electrical components, etc., and control systems, power cables and other electrical equipment, integrating photoelectric information and electronic products.

Photovoltaic cables use solar panels as a light source to provide electrical energy to the battery and to control the battery’s working status and service life. In the system operation, its charge is absorbed in large quantities, and photovoltaic battery devices must have a certain capacity of DC battery as a supplement, so its capacity and weight are not important for the system itself.

Photovoltaic cables not only can control the battery operating voltage and output power but also can use an inverter or other types of power supply according to the system’s needs. In addition, under certain conditions, it can form a bi-directional power supply circuit, which can enable other users in the system to obtain a stable DC power supply, thus improving the reliability and stability of equipment operation.

Applications And Specifications Of Photovoltaic Cables

1. According to the system requirements and different wiring methods of the grid, PV grid-connected cables can be divided into PV-level DC reactive power compensation cables and solar DC output reactive power compensation cables for synchronous inverters. They can be distributed through a dedicated network and convert solar energy back to the grid after being connected to the grid.

Among them, the performance indicators of PV-grade reactive power compensation cables can be selected according to the technical requirements of equipment manufacturers and are usually divided into two categories: high-temperature flame retardant and low-smoke non-polluting.

The material used for DC reactive power compensation cables is low-smoke, non-polluting polyvinyl chloride material. It uses high-density polyethylene and aluminum as the insulator, and the insulation core is made of PVDF (high-temperature glass wool) with a layer of high-temperature resistant film, which can effectively prevent damage caused by solar radiation to the reactive power compensation cable.

Other reactive power compensation equipment and other non-metallic shielding materials can also be used according to system requirements.

The materials used for the solar DC output reactive power compensation cable for synchronous inverters are high-density polyethylene, aluminum, and a cross-linked polyethylene sheath. It has a compact structure, small volume, lightweight, stable size, and long service life. Good environmental adaptability and electrical performance and other characteristics. Therefore, this type of product should be selected for good environmental adaptability and performance indicators when applied in inverter devices.

(3) solar panels and components between the connection cable: photovoltaic modules directly connected to the photovoltaic module, the cable has sufficient DC voltage because the current received by the component is DC. So that the PV module is connected to the PV panel, thus effectively ensuring the stability of the PV cell system in all directions.

(5) Connection cable between solar module and inverter and battery: The solar device is connected according to the current provided by the inverter to realize the inverter’s control of the battery current and to deliver the electrical energy generated by the PV module back to the power system.

(6) solar energy and photovoltaic power generation components connected to the line: the cable is used between photovoltaic modules. It can be connected in series or parallel for power supply as needed.

Used in a photovoltaic system, household grid. Basic working principle: The battery converts DC power into DC power, and after filtering, the inverter outputs a selective voltage to DC power from the battery.

At the same time, the output voltage can be plus or minus 10%, and the DC current can be varied between 0-10 A. However, it must have enough capacity to ensure that the inverter works properly under harsh working conditions.

At present, there are several methods of PV power cable use: traditional single-core cable has good adaptability to PV power generation projects, but from the overall system scheme, its high-reliability requirements for PV power plants. the use of single-core cable structure.

4. Various reactors within the same system convert the power supply to different voltage levels, which allows the PV inverter to obtain the maximum output power.

The conversion between different reactors is generally done in the following three ways.

(1) Power factor conversion: It is the conversion of AC input power to DC output power at a fixed power factor.

(3) Rectification and filtering before conversion to the inverter input voltage. Photovoltaic cables can convert different voltage levels of power.

The converted DC voltage is the same as the DC current. When no additional load is added to the input, the DC output from the PV inverter is approximately equal to the AC current. Compared with the conventional load method, the output current of the PV module is also reduced, making it easier to meet the AC power factor requirements when using the PV module.

During the operation of the PV module, the DC current caused by the positive and negative AC currents generated by the power supply are unbalanced, and there is also a voltage shift in the working voltage of the inverter (usually called high harmonics in the grid system) so different voltage levels of reactors need to be installed on the inverter box to ensure that the inverter can meet the requirements during normal operation.

For multiple grid-connected AC systems, it is very difficult to convert between different voltage levels. Therefore, most of the cables between solar panels are used for conversion and with other types of power supply devices, so that the system can obtain the maximum output power.

5. PV inverter cables for synchronous inverters do not need to be converted through a large number of power transmission lines, their output current is small, and they have good transmission performance and operational life.

It is suitable for power grids of different frequencies, such as AC or DC, and has the advantage of high maximum output current as well as maximum output voltage with peak current in AC loops and also high insulation resistance, and minimum losses and maximum voltage rating in DC.

In systems where inter-battery connection cables are not required to be connected to a circuit before the signal transfer, the cables need to be insulated to prevent interference.

However, when these lines are not required, all cables can be protected from damage as long as the insulation is strong enough. In the connection of solar batteries to other PV inverters, there are many advantages compared to both direct solar panel cables and cables connecting batteries between solar batteries.

They are used for direct connection to the battery and thus do not require any power supply lines for signal conversion. They do not require power transmission to convert the battery to DC power. Both of these methods increase the reliability and stability of the equipment.