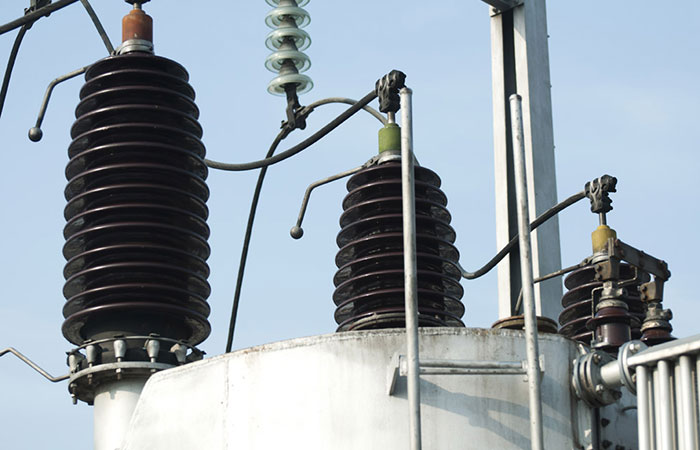 4. Glass insulators: insulators whose insulating parts are made of tempered glass. Its surface is in a state of compression pre-stress, such as cracks and electrical breakdown, glass insulators will break into small pieces, commonly known as “self-explosion”. This feature makes the glass insulator in operation without “zero value” detection.

5. Composite insulators: also known as synthetic insulators. The insulator is composed of glass fiber resin core and organic material sheath and skirt. Its characteristics are small size, lightweight, high tensile strength, and excellent resistance to fouling and flashing. However, the aging resistance is not as good as that of porcelain and glass insulators.

Composite insulators include rod-shaped suspension insulators, insulating cross-arms, pillar insulators, and hollow insulators. Composite bushings can replace the porcelain bushings used in a variety of power equipment, such as transformers, lightning arresters, circuit breakers, capacitive bushings, and cable terminals. Compared with the porcelain sleeve, it has the advantages of high mechanical strength, lightweight and small size tolerance, but also can avoid the damage caused by bursting and breaking.

The creepage distance of fouling-resistant insulators is generally 20% to 30% higher than that of ordinary insulators, or even more. China’s power grid fouling flash-prone areas are used to double umbrella structure shape of the fouling insulator, such insulators self-cleaning ability, easy to clean manually.

8. DC insulator: mainly refers to the disc insulator used in DC transmission. DC insulators generally have a longer creepage distance than AC fouling insulators, and their insulating parts have higher body resistivity, and their connecting fixtures should be equipped with sacrificial electrodes to prevent electrolytic corrosion.