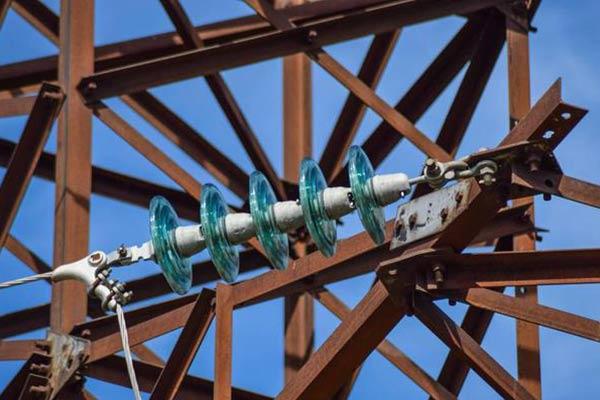 However, glass insulators are still subject to some troublesome problems in operation and maintenance. Such as high self-detonation rate, and broken string (which rarely occurs, but still has a certain probability), once the above issues occur will seriously affect the line safety. Today to talk about the causes of the above concerns and countermeasures.

Glass insulator glass parts for tempered glass, which is characterized by the existence of compressive stress on the surface, and the internal presence of tensile stress.

Once the balance of compressive and tensile stresses in the glass insulator glass parts is disrupted, the stress will quickly produce cracks, resulting in the shattering of the glass parts, that is, self-detonation.

The causes of glass insulators can be divided into two categories: the quality of the product itself and the external operating environment. Actual cases often exist for both reasons.

The main reason is that the glass insulator contains impurity particles inside the glass parts, the most common is NIS particles, NIS in the glass fusion, annealing process phase change state is incomplete, in the insulator into operation that slow phase change, expansion, resulting in cracks inside the glass. When the diameter of the particle impurities is less than a certain value, it may not be able to be removed by cold and thermal shock, resulting in the high rate of self-exploding insulators in operation 500kV transmission line toughened glass insulators concentrated self-exploding phenomenon analysis. Impurity particles located in the internal tension layer of the glass parts, the probability of self-explosion is higher, because the glass itself is a brittle material, pressure-resistant but not tensile, so most of the broken glass is triggered by tensile stress.

an internal impurity particle triggered by self-explosion in the first three years of operation is higher, thereafter will gradually decline, which is an important rule to determine the cause of self-explosion.

b insulator string in different locations with the same probability of self-detonation.

is mainly fouling and temperature changes. In the accumulation of dirt, moisture, and electric field under the simultaneous action of the three, the insulator surface leakage current is too large, resulting in part of the dry belt, dry belt position when the air breakdown occurs, the resulting arc will erode the glass skirt, when the depth of erosion will cause self-explosion. If the insulator suffers a lightning strike during the above process, the probability of self-detonation of the glass insulator, which has been eroded by the arc, will increase significantly. Excessive accumulation of dirt is one of the keys, which may be the too high salt density of accumulated dirt or too many metal powder particles in the dirt.

a maybe put into operation a few years before the self-explosion is not obvious, operating a few years after a certain time concentrated occurrence (significant changes in the local source of fouling caused by excessive accumulation of fouling).

c the same tower did not self-destruct insulator steel foot there is damage (excessive accumulation of pollution triggered by local arcing caused by the steel foot near the glass damage), the umbrella surface of the internal existence of small cracks.

With a single defect triggered by the self-detonation, the crack to reverse the search, you can find the point of initiation. If the residual hammer on the broken glass slag is a radioactive shape, the crack initiation point is also the location of the start of the self-detonation is located in the head of the glass pieces. The case of spontaneous detonation is caused by the quality of the glass parts themselves, such as ingredients, dissolution process, etc.

If the residual hammer on the broken glass slag is fish scale, and the starting position of the self-explosion is located near the bottom of the glass parts near the iron cap, the case of self-explosion is caused by two possible reasons. That is, due to the product’s own defects of self-explosion or external forces caused by glass breakage, this external force can be mechanical stress, but also electrical stress. Such as sustained electric spark strikes, high-frequency current, and uneven leakage current triggered by the breaking of glass pieces.

If the residual hammer on the broken glass slag is the fish scale and projectile shape at the same time, the self-destruction starting point is located on the umbrella skirt of the glass parts. In the case of spontaneous detonation, both internal and external causes may result.

① control of entry into the network, control the quality of glass insulators entering the network by sampling and testing mechanical damage and steep wave impact performance.

③ Strengthen inspection, in bad weather such as lightning strikes after the transmission line, should be a timely special inspection.

④ Pay attention to transportation, infrastructure, and emergency repair transportation of tempered glass insulators, which should be protected by protective objects to avoid damage.

For disk-type suspension insulators, string breakage occurs mostly on porcelain insulators, while glass insulators rarely break, but there are examples of such breakage.

② Adopt lightning protection measures, such as parallel gaps, new parallel gaps with zinc oxide valves, and line arrester, etc., so that the discharge arc does not touch the insulator when lightning strikes or short circuits are caused by other reasons.

③ Improve the line lightning resistance level and reduce the probability of insulator strings withstanding short-circuit current, which is relatively easy for low voltage level lines. For example, reduce the grounding resistance, to a certain range to increase the protection angle.

① The glass insulator self-exploded from the glass parts of the balance of compressive and tensile stress is disrupted, internal impurity particles left behind, external dirt is too heavy is a common cause of high self-exploded rate.

② for the internal impurity particles triggered by self-explosion, the first three years of operation are higher, and will gradually decline thereafter, the insulator string in different locations of the same probability of self-explosion. If the residual hammer glass into a radial shape, the cause of self-explosion can also be determined as internal impurities. For the self-detonation triggered by excessive dirt, the string of high-voltage end, low-pressure end of the probability of self-detonation is greater than the middle, self-detonation occurs in correspondence with changes in the source of dirt.