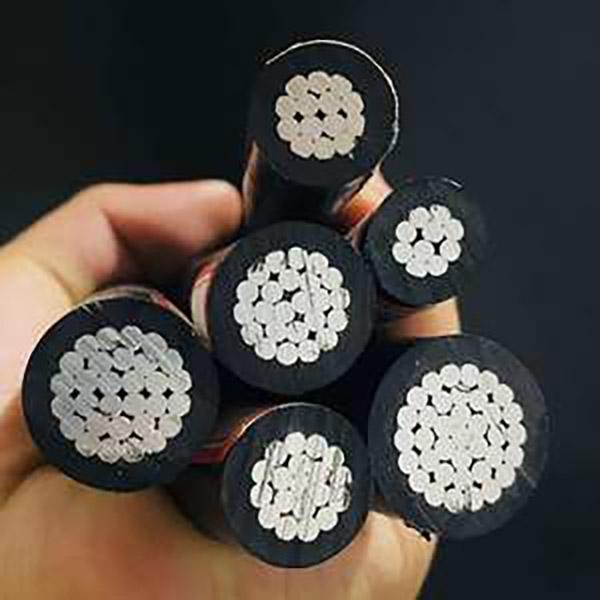 Threats of one kind or another posed by nature to the distribution network have led to the creation of aerial bundled conductor cable(ABC cable). Zhaoqing Power Supply Bureau in 2002 distribution network transformation began in the suburbs, counties and towns began to use overhead insulated conductors, but the annual thunderstorm season frequent lightning breakage of the fault. Therefore, overhead insulated line lightning protection is very important work.

The characteristics of aerial bundled cable

However, insulated conductors in the process of application, there are some new problems. Among them, the most prominent problem is the subject of lightning strikes, which are prone to breakage faults.

Guangdong Province is a thunderstorm-prone area, according to the reference information provided by the meteorological department shows that the city’s average lightning days in the past three years for 75 to 80 days, belonging to the high lightning days area. 2009 the city’s distribution network line faults tripped a total of 1514 times, including 751 lightning faults, accounting for 49.6% of the fault rate. It can be seen that the main cause of line failures is lightning faults.

Distribution network lightning overvoltage flashover, also known as atmospheric pressure or higher than atmospheric pressure in the high current discharge, for the arc discharge form. Due to lightning caused by the insulated wire breakage of the same cause and bare wire, is damaged by lightning overvoltage line insulation, resulting in a short circuit line grounding. As our 10kV distribution network for the grounding system by the arc extinguishing coil, in the single-phase grounding current flowing through the ground to get compensation, single-phase grounding fault is generally not to break the line. When two-phase or three-phase flashover and the formation of metallic short-circuit channel, causing thousands of amperes of continuous frequency current, arc energy will suddenly increase.

When struck by lightning, distribution lines using bare conductor wire (including direct lightning and induction lightning) will cause line flashover. At this time, the continuous frequency short-circuits the current caused by the arc in the role of the electromagnetic force. So that the arc to both sides of the wire drop lightning point rapidly distributed, the lightning current through the line, switch, and transformer equipment such as lightning arrester quickly into the earth, or before the frequency current burned the wire, causing tripping. Thus, it rarely happens to break the line accident.

However, when the insulated conductor suffers a lightning strike, the situation is not the same. Lightning overvoltage triggers insulator flashover and breaks through the insulation of the insulated conductor. The breakdown point is near the insulation, preventing the arc along the surface of the wire to both sides of the rapid movement. Thus, the arc can only burn at the point of breakdown. The heat generated by the high-frequency arc current of up to several thousand amperes (kA/ms level) is concentrated on the insulation breakdown point and fuses the wire soon before the circuit breaker trips. Flash fuse point is usually in the power line insulator ends of the wire 10-30 cm range because of this range of the weakest electric field distribution.

When the lightning strike acts on the insulator, the electric insulator flash depends on the overvoltage value and the level of the line insulation, the chance of arcing usually depends on several parameters: the rated line voltage U2, flash path L, the moment of lightning shock occurs, the size of the lightning current and line parameters. These parameters are mainly determined by the average gradient of the operating voltage along the flash path. According to the formula calculation, it can be seen that the heat generated by the frequency renewal current will be 10,000 times larger than the heat generated by the lightning current. It can be seen that the induced overvoltage is the cause of lightning breakage, while the frequency renewal current is the decisive factor in causing the breakage of the insulated wire.

(1). Installation of the overhead ground line

The main is the amplitude of the lightning overvoltage into current, and the grounding resistance of the tower to drain out, thereby significantly reducing the lightning overvoltage, so that the wire is protected. 10kV distribution network insulation level is low, lightning strikes overhead ground line is easy to cause a backlash flashover, and still occur in the frequency continuity burnt off the insulated wire fault.

A zinc oxide arrester can limit the induction overvoltage amplitude, and absorb the discharge energy after the lightning flash, to prevent the arcing of the frequency continuity, so as to achieve the purpose of protecting the insulated conductor. Zinc oxide arrester protection range, lightning characteristics, and lightning arrester parameters, with the lightning arrester grounding network grounding resistance values and line insulation level. The lightning characteristics which is currently difficult to collect field data, only according to the research institutions to provide simulated field test data, the use of line arrester lightning protection to inhibit lightning damage, the key is the grounding impedance of the grounding line.

Zhaoqing city suburbs under the Northridge Mountains in 2003 put into operation 10kV Ruihua line and other four double-back lines with the same pole. Design is in accordance with the induction overvoltage amplitude of 200-300kV peak, wave head of 2μS. line using FP-1-0/2.5 or FZS-0/5T pin type, pillar composite insulator, lightning grounding resistance of 10 ~ 25Ω, every 2 ~ 3 gear rod combined with the planning of the lead-off knife gate installation of a set of the lightning arrester, running 8 years only two lightning strikes break line.

The inspection found that the breaking point is occurring in the two groups of lightning arresters between the tower, composite jacket zinc oxide arrester as line overvoltage protection, can reduce the lightning strike break line fault. But due to the limited scope of protection, it can not completely eliminate lightning breakage accidents. And long-term operating voltage, accelerating the deterioration of the resistance valve piece and damage or grounding lead wire is stolen, will lose the line protection role.

The spike-wave current has a small current amplitude for a period of time before it crosses zero. At the same time, the residual voltage of the current limiting element cuts the discharge voltage, so that the arc is instantaneously extinguished and achieves a rapid cut-off frequency current. To achieve effective prevention of overhead insulated conductors due to high-frequency current continuity and melting (lightning break) purposes. This way and insulators are installed in parallel, not to destroy the insulation layer of the insulated wire, but to improve the impact withstand voltage level of the line. Ensure that only under the action of particularly high lightning-induced overvoltage flashover, the frequency continuity will be due to the synthetic insulator discharge creepage distance and can not build an arc and extinguish it.

Overhead insulated line cable overvoltage protector advantages: First, easy maintenance and management. Second, the protector action when the frequency current is interrupted immediately, the circuit breaker will not operate tripping, and the power supply will not be interrupted. Third, insulated wires do not need to strip the wire insulation layer, will not expose the electrical part, and can be installed with electricity. Disadvantages: First, the investment is larger. Second, the number of equipment on the pole increases. Third, is the need to install grounding devices.

This method is easy to operate, has low investment, has no grounding device, and can prevent lightning breakage. But need to strip the insulation layer, there is a local conductor exposed, there are sealing and insulation defects, and the lightning strike must be replaced after the burning of the arc protection fixture.

Lightning is a complex natural phenomenon. In summary, relying solely on a protective measure is difficult to solve the problem of lightning protection of insulated lines. Must take comprehensive lightning countermeasures to effectively prevent lightning accidents, using a combination of ‘guidance’ and ‘blocking’. That is, overhead insulated lines every 3 to 4 files installed overvoltage protector, the rest of the tower on the installation of anti-arc gold combined with lightning protection measures, can effectively reduce the probability of lightning flashover, to avoid lightning breakage fault occurred, to ensure the safe operation of the distribution network.