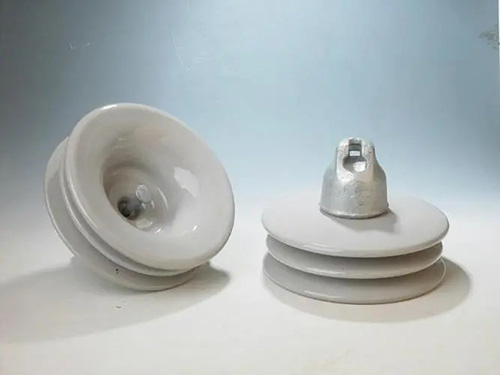 Among the electrical insulators used in overhead lines, porcelain insulators still occupy 1/3 share. It often appears in the operation of the defective fault including zero value, broken string, rust, etc. Once the above problems occur will seriously affect the line safety, today to talk about the causes of the above problems and countermeasures.

The porcelain insulator’s poor gluing interface process and poor material of porcelain parts will lead to the generation of zero value insulators.

The porcelain insulator gluing interface exists in porcelain, cement, steel, and other materials with different thermal expansion coefficients. Generally, materials such as asphalt need to be coated as a buffer layer. When the buffer layer is too thin or not enough to fit with porcelain, cement, and other materials, the insulator withstands external temperature changes leading to interface cracking.

When a tower is struck by lightning, the insulator may be subjected to a high impact voltage of steepness and amplitude. At this time, the highest voltage (porcelain head), the relative weakness of the insulation may produce partial discharge damage. When subjected to repeated steep wave impact, the damage to the insulator’s porcelain head will gradually expand to a certain extent, leading to the formation of low-value insulators.

Severe ice cover and high winds beyond the design wind speed cause insulators to be subjected to excessive mechanical stress, which may lead to cracking of insulators at the steel foot position, resulting in low zero value insulators.

A. To carry out sampling inspection of porcelain insulators in multi-mine areas, replace a portion of insulators to the laboratory for sampling and testing. Conduct insulation resistance test when air humidity is high (some low-value insulators are difficult to be measured when dry) and carry out steep wave impact test. Check whether there is any damage to the head of the porcelain parts.

Adopt diversion-type lightning protection measures such as parallel gaps and lightning arrestors to avoid lightning current flowing through insulators to reduce the probability of insulator damage.

③ Enhance the lightning resistance level of the line

Modify grounding, strengthen insulation, and try to limit the magnitude of impact voltage that insulators bear after being struck by lightning.

When the insulator surface is wet, the steel foot and steel cap are equivalent to a pair of electrodes, the water film on the surface of the umbrella disc is equivalent to the electrolyte, and the leakage current flowing through will continue to produce the electrolytic process.

When the wire is negative polarity, the potential of the iron cap side is higher, corrosion occurs at the mouth of the iron cap (here is equivalent to the positive electrode and electrolyte contact position).

The electrolytic corrosion effect on the surface of the AC line insulator is weak, and the rusting of the steel foot and steel cap generally originates from the overall oxidation. After the loss of galvanized layer on the surface in long-term operation, the internal steel starts to rust, generally presenting the overall discoloration of steel feet and caps.

For DC insulators, it should be ensured that the steel foot has a zinc sleeve and the steel cap has a zinc ring.

Early DC insulator steel cap without zinc ring can be used to prevent corrosion by replacing the zinc ring. According to the analysis of corrosion location above, the zinc ring should be installed at the mouth of the cap where the steel cap is in contact with the insulating umbrella.

The national standard GB/T19443-2004 stipulates that the zinc sleeve should be made of zinc with a purity of not less than 99.8%. The fused area is not less than 80% of the articulated part of the ring cap, the weight of the zinc sleeve should be at least 5 g, and the exposed size is about 50% of the total length. There is no promulgated standard for zinc rings, but the corresponding provisions have been made in the current technical specification book for ±1100 kV UHV DC insulators, which generally require a maximum thickness of at least 6 mm and a mass of at least 150 g.

For AC insulators, when steel cap corrosion and zinc layer damage are found, the steel foot should be inspected and replaced as soon as possible if the corrosion has occurred. If only the steel cap is corroded, the operation can be continued, but monitoring should be strengthened to prevent the occurrence of surface fouling.