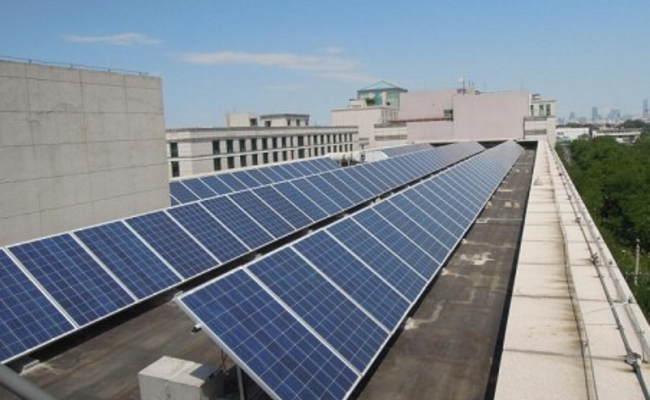 Photovoltaic power generation is a very common new energy source today. Compared to hydropower and wind power, its construction is not so demanding in terms of area selection. Hydropower is built in areas with abundant water resources, such as river sections with high water flow.

And wind power is generally built in the open terrain of the mountains, hills, and year-round wind. The photovoltaic is different, centralized large-area photovoltaic built in the desert, the Gobi areas, making full use of abandoned land resources.

Distributed PV is generally built on the roof of buildings, roofs, plant roofs, vegetable sheds, and other places, making full use of space. So what are the similarities and differences between distributed and centralized PV?

(1) the same principle, are the use of solar energy in electricity, and then the generated electricity will be grid-connected transmission to the grid for production and life.

(2) the same components, generally common are the use of monocrystalline silicon panels or solar thin film. Among the well-known manufacturers are Yingli, and Hanergy thin film power generation.

(3) the secondary equipment used in the power station is different: distributed photovoltaic power station because it is low-voltage 380V grid-connected, so the primary and secondary equipment are used less. Among them, the inverter is generally the kind of wall-mounted inverter, installation is relatively simple, and small. The transformer is also small. The common ones used are power quality monitoring, anti-islanding protection devices, fault resolution, etc.

According to the requirements of different regions, the requirements of equipment and technical parameters are also different. But for the time being, it is a necessary device for every distributed PV. The centralized PV plant has its substation because of the high voltage level.

The inverter is usually located in the substation room and is larger. The voltage boosting function is done by the box transformer, generally up to 35 kV. there is more equipment in the boosting station, the primary equipment includes a station transformer, switchgear, various transformers, arc extinguishing coil, main transformer, etc. Secondary equipment includes microcomputer protection, power meter, dispatch data screen, etc. It is relatively complicated, and the dispatcher directly implements centralized power station management. At the same time, the station also needs to have, a power control system, etc., compared to the distributed PV is much more complex.

To sum up, there are many similarities and differences between distributed PV and centralized PV. But for now, the national policy is to support distributed photovoltaic power generation. Centralized large-area PV is a little more difficult to grid-connect, and the requirements are higher. Distributed photovoltaic prospects are better, and for the exact size of the power plant, the amount of investment is similar. And the location of the distributed PV installation is a more crowded area, maintenance is also more convenient.