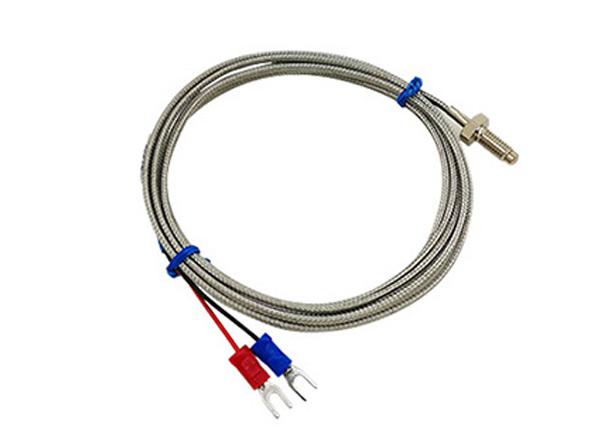 The k-type thermocouple extension wire and cable is a base metal thermocouple with strong oxidation resistance, which can measure the temperature of the medium from 0 to 1300 °C. It is suitable for continuous use in oxidizing and inert gases, with a short-term use temperature of 1200 °C and a long-term use temperature of 1000 °C. The relationship between its thermoelectric potential and temperature is approximately linear, and it is currently the most widely used thermocouple. However, it is not suitable for bare wire use in vacuum, sulfur-containing, carbon-containing atmospheres, and alternate redox atmospheres. When the oxygen partial pressure is low, the chromium in the nickel-chromium electrode will be preferentially oxidized, which will greatly change the thermoelectric potential, but the metal gas has little effect on it. Therefore, metal protection tubes are mostly used.

(1) The high-temperature stability of thermoelectric potential is worse than that of N-type thermocouples wire and precious metal thermocouples, and it is often damaged due to oxidation at higher temperatures (for example, over 1000 °C).

(2) The short-term thermal cycle stability is not good in the range of 250-500 °C, that is, at the same temperature point, in the process of heating and cooling, the thermoelectric potential is different, and the difference can reach 2-3 °C.

(4) Under the high-flux medium irradiation environment for a long time, due to the metamorphism of manganese (Mn), cobalt (Co), and other elements in the negative electrode, its stability is not good, resulting in a large change in thermoelectric potential.

The positive electrode of the 2 wire thermocouple cable is a platinum-rhodium alloy containing 10% rhodium, and the negative electrode is pure platinum.

(1) Stable thermoelectric performance, strong oxidation resistance, suitable for continuous use in an oxidizing atmosphere, long-term use temperature up to 1300 ℃, when it exceeds 1400 ℃, even in the air, the pure platinum wire will recrystallize, so that The grains are coarse and fractured.

(2) High precision, the highest level of accuracy among all thermocouples, is usually used as a standard or to measure higher temperatures.

(3) Wide range of use, good uniformity, and interchangeability.

(4) The main disadvantages are: that the differential thermoelectric potential is small, so the sensitivity is low. The price is relatively high, the mechanical strength is low, and it is not suitable for use in a reducing atmosphere or under the conditions of metal vapor.

E-type thermocouple compensating cable is a relatively new product, the positive electrode is a nickel-chromium alloy, and the negative electrode is a copper-nickel alloy (constantan). Its biggest feature is that among the commonly used thermocouples, its thermoelectric potential is the largest, that is, the sensitivity is the highest. Although its application range is not as wide as that of K-type couplers, it is often selected under the conditions of high sensitivity, low thermal conductivity, and large resistance that can be tolerated. Restrictions in use are the same as type K but are less sensitive to corrosion in atmospheres containing higher humidity.

The main features of the thermocouple are strong anti-oxidation ability in temperature regulation below 1300 °C, good long-term stability and short-term thermal cycle repeatability, good nuclear radiation resistance, and low-temperature resistance. In addition, in the range of 400 ~ 1300 ℃, the linearity of the thermoelectric characteristics of the N-type thermocouple wire is better than that of the K-type thermocouple wire. However, in the low-temperature range (-200 ~ 400 ℃), the nonlinear error is large, and at the same time, the material is hard and difficult to process.

J-type Thermocouple extension and compensating cable: The positive electrode of this duplex thermocouple is pure iron, and the negative electrode is constantan (copper-nickel alloy), which is characterized by its low price. It is suitable for reducing or inert atmosphere for vacuum oxidation, and the temperature range is from -200 to 800 °C. However, the commonly used temperature is only below 500 °C, because the oxidation rate of the iron hot electrode is accelerated after this temperature is exceeded. If the wire with a thick wire diameter is used, it can still be used at high temperatures and has a long life. The thermocouple is resistant to hydrogen (H2) and carbon monoxide (CO) gas corrosion, but cannot be used in an atmosphere containing sulfur (S) at high temperatures (eg 500°C).

Among the base metal thermocouples, it has the highest accuracy and good uniformity of the thermode. Its operating temperature is -200 ~ 350 ℃, because the copper hot electrode is easy to be oxidized, and the oxide film is easy to fall off. Therefore, when used in an oxidizing atmosphere, it should generally not exceed 300 °C. In the range of -200 to 300 °C, their sensitivity is relatively high. Another feature of copper-constantan thermocouples is that they are cheap and are commonly used in several stereotyped products. The cheapest one.