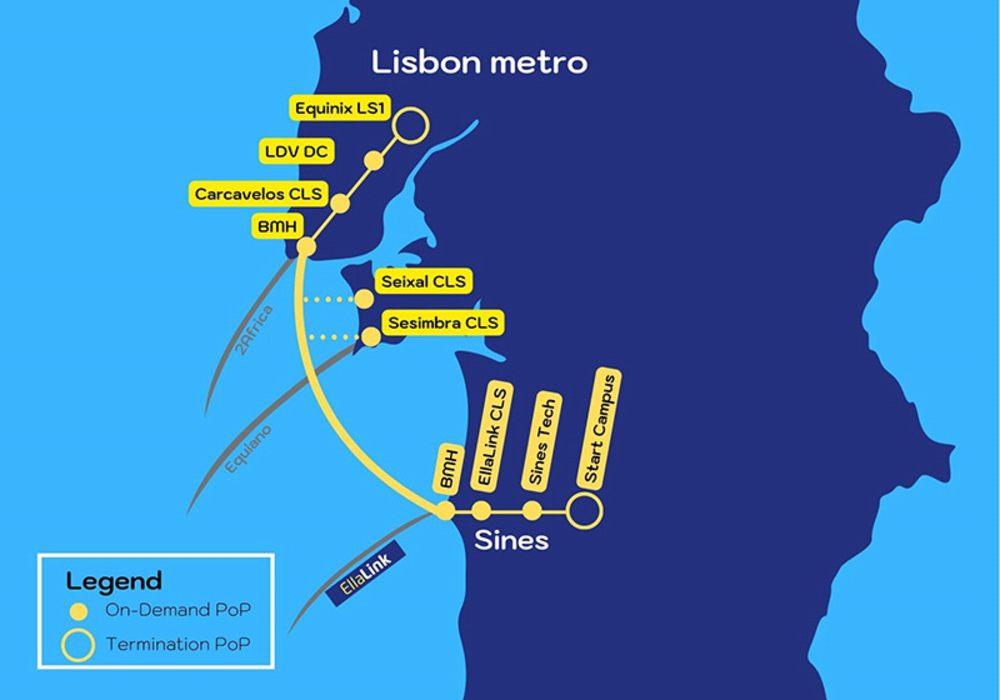 The Olisipo system is designed to connect all international submarine cable landings in Portugal to the main data centers in the region, using a secure and risk-proof infrastructure.

This new fiber optic submarine cable will land at Carcavelos and Sines, with branch paths built to connect Seixal and Sesimbra cable landings to the Setubal region.

According to the plan, the system will contain 288 fibers and the total design capacity of this 110 km long fully buried cable will be 4.3 Tbps.

In addition, the robustness of the cable will be enhanced by line engineering, with special attention to cable crossings, full subsea and surface burial strategies, full cable armoring, and additional shore-end protection using inner diameter tubes at Sines.

The Olisipo system will provide a direct POP-to-POP connection between the main data centers located in Sines and the Lisbon metropolitan area.

The Olisipo submarine cable route has attracted the attention of major market players.

EllaLink emphasizes that this new cable development will integrate more customers to collaborate to expand and build a very important connection.

Olisipo is expected to be operational in 2024.

Why do 90% of The World’s Data, Rely on Submarine Fiber Optic Cables for Transmission?

Fiber optic cable is so heavily used around the world, plus the subsea is much safer for land and is much easier to install than underground.

Because the subsea is much safer compared to the land. In the world, almost all communications between countries rely on submarines. Fiber optic cable submarine cable is also known as submarine communication cable, submarine fiber optic cable is like a dense distribution of blood vessels on the earth, known as the blood vessels of the Internet. Submarine fiber optic cable is a cable wrapped with insulating material, mainly laid on the seabed, and used for telecommunications and network transmission between countries. It is a wire wrapped with insulating material and laid on the seabed.

In terms of transmitting data, only fiber optic cables can meet the requirements. According to the chart or plan developed by cable operators, there are more than 400 submarine fiber optic cables around the world, many of which are very old. With the current rapid development of cloud computing, the Internet of Things, big data, mobile connectivity, and other ICT industries, there are more than 1,000 satellites in orbit around the Earth. On the surface, there is a rising demand for connectivity from all parties around the world. It gets the attention of governments as well as investors.

Submarine fiber optic cable is so important that it must be installed in a safe place, and a submarine is much safer than on land.

Why Place The Cable In The Deep Sea? Is It Bad On Land?

There is indeed footage capturing sharks chewing up submarine cables. But since 2006, the probability of damage to cables by undersea fish animals and sharks has been less than 1%, which is related to the complex basic structure of submarine fiber optic cables.

In addition to the innermost fiber bundle, there is at least an alkane layer, polyethylene layer, steel strand layer, polyester tree ester or asphalt layer, polycarbonate layer, aluminum waterproof layer, copper or aluminum tube, and paraffin wax outside these components.

Submarine fiber optic cables are not only structurally strong and lighter, but they also have advantages that terrestrial cables cannot have. For example, the topography of the sea floor is much less undulating than the span of land, so there is no need to dig deep trenches or build supports to support the cables when they are laid.

Second, buried in the submarine cable is not easily disturbed by human production activities, if there is no large sea quake, ordinary wind and waves are not enough to produce a significant impact on it.

The transnational information transmission between countries and countries, the vast majority of the time is achieved through submarine fiber optic cable, transoceanic Internet data transmission is up to 99% of the proportion.

As early as 1850, the world’s first submarine cable connected Calais, France, and Dover, England, for information exchange. And the first intercontinental submarine communication cable linking Newfoundland and Ireland was completed in 1858.