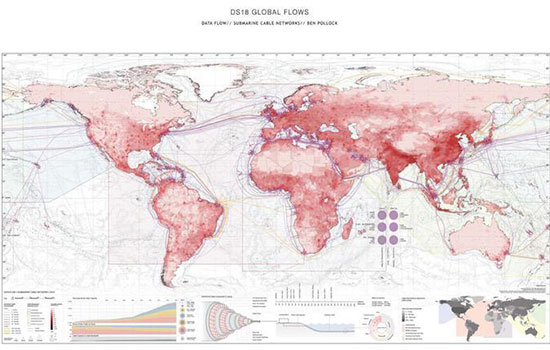 On foreign video sites, there is such a video with 1.7 million plays, the video, the naughty shark is destroying the submarine cable, accidentally captured by the camera. Then the question arises, what is the role of the submarine cable? Do sharks do damage from time to time?

Most importantly, how are these cables laid to the sea floor?

Submarine cables, as the name implies, are cables laid on the sea floor.

The telegraph was invented by Morse in 1837, and in the days before the radio was invented, this wired communication method quickly became popular, although the characteristics of wired transmission made the telegraph only available on land. 1850, the first submarine cable of about 46 kilometers long was laid across the English Channel, enabling effective cross-sea communication.

As the subsea cable wire has a large information capacity, long transmission distance, strong anti-interference ability, good confidentiality, low price, and other characteristics. To this day, the submarine communication cable network still carries about 95% of the global transnational communication data volume, which is irreplaceable by any other means of communication.

(2) the laying of submarine cables is a world-class problem, China how to solve it?

The concept of the problem has been solved, followed by the submarine cable is how to lay? It is important to know that the laying and maintenance of submarine cables is a recognized problem in the world, and only a few countries have the ability to complete it.

This requires a new type of equipment – a cable construction vessel.

In March 2018, China’s first 5,000-ton new underwater sea cable construction vessel was successfully docked. With an overall length of 110 meters, a beam of 32 meters, a depth of 6.5 meters, and a maximum draft of 4.8 meters, the vessel is classified by the China Classification Society (CCS) and is a steel, non-self-propelled, square-barge, new submarine cable construction vessel.

In terms of size, capacity, and draught, this vessel named “Qifan No.9” is not comparable to some large and medium-sized cargo vessels. But its successful docking is undoubtedly exciting news for the domestic power and communication industry. Because it can effectively complete the important task of submarine cable laying and maintenance.

“One crane”: In the laying process, the construction vessel first loads the submarine cable produced by the cable manufacturer in trays by lifting the whole or bulk over the cable and other means.

“Two put”: the construction vessel in a certain distance from shore (usually about 4.5 km, in order to ensure the smooth laying of the cable on the seabed) when the cable into the sea. At the same time put on the cable, every distance is fixed on a similar “life buoyancy device”, making the cable float on the sea surface.

“Three towing”: the shore traction device will floating cable towed to shore and fixed. After the cable comes ashore, the “lifebuoy” is removed, allowing the cable to sink to the sea floor by its own gravity.

After that, the laying vessel along the designed laying route “while walking cable”, while using underwater monitoring equipment real-time feedback laying situation, and according to the working conditions of the vessel speed and direction. The ocean cable is under the speed of adjustment, to avoid damage to the cable around the uneven places and rocks.

2. 1-meter long submarine cable weighs 82 kg, how can this be towed?

In order to resist the corrosion of seawater and the huge pressure of the sea floor, and even sharks such as marine life for submarine cable damage. The outer layer of the submarine cable needs to be heavily protected by asphalt, steel wire armor, a water barrier, insulation layer. And in order to accelerate the sinking speed of the cable while enhancing the mechanical strength of the cable, the cable will also have a layer of lead sheathing.

This submarine cable compared to the traditional oil paper insulated submarine cable, has the advantages of easy installation and maintenance, and safe and reliable performance. But the problem arises, such a heavy cable to be laid to the sea bed through the submarine cable construction vessel, but also requires the cable between the joint as little as possible, which how to do?

The drum and wheel type cable laying machine usually has a diameter of about 4 meters and a pull force of 250-400 kN, which occupies less space and has a large pull force and stable operation, and is mostly used to complete the salvage and recovery of submarine cables.

Compared with the drum type, the linear cable laying machine covers a relatively large area, the pull force is smaller, about 200 kN. However, it can effectively complete the laying of submarine cables connected with repeaters or splice boxes. And because of the relatively smooth operation of the linear cable laying machine, it is mostly used for the laying of long-distance submarine cables.

In order to ensure the quality of submarine cable laying during the construction process, the cable laying equipment usually has two different automatic control modes of tension control and speed control.

The tension automatic control device will be set according to the specific requirements of submarine cable construction, the undersea communication cable can withstand the maximum tension of the upper limit.

When the tension detected on the cable laying machine exceeds the upper tension limit, the cable laying machine automatically lays the cable outward or retracts it inward. By controlling the amount of spare cable laid to ensure that the laid cable can be completely close to the seabed, no overhang phenomenon. Because once the overhanging cable ends stress concentration, after a long period of seawater wash, the cable stress point at the breakage easily, affecting the cable life.

This is like a rope for drying clothes, if hanging up, hanging heavy objects, it is easy to break. If it is naturally laid flat on the ground, it is naturally more durable when not under stress.

The mode of automatic tension control is usually used in the working condition where the cable needs to be buried during shallow sea operations below 200 meters.

For the seabed above 200 meters, submarine cables are mostly laid – the cables are placed naturally on the seabed and do not need to be buried with sand. This situation does not require additional consideration of the effect of the burial process on the tension on the cable, the use of speed control mode can control the cable margin, and thus indirectly control the quality of laying.

2. Power positioning device: ensure that the vessel “does not move at all”

The “Qifan No.9” itself is a non-powered barge, which needs to be driven by a tugboat to sail under normal circumstances. However, it has four 1800kW suspended full gyratory rudder propellers at the four corners. It can provide power for the vessel in the submarine cable laying construction, and improve the flexibility of the vessel and the efficiency of the sea cable laying operation.

But to be able to move steadily is only a necessary prerequisite, and how to ensure that the ship travels at the same speed as the cable laying speed under the influence of uncertainties such as waves? This relies on the vessel’s power positioning (DP) system.

In previous columns, we have talked about the ability of offshore drilling rigs to stay put in heavy storms. The successful completion of the combustible ice mining task is due to the effective control of the vessel’s position by the DP system. (The maximum drilling depth of 15,240 meters, “Blue Whale No. 1” drilling all over the world is no problem)

But the needs of submarine cable construction vessels are no longer just about positioning. Rather, it needs to be able to effectively ensure the correct position of the vessel. Real-time and accurate recording of latitude and longitude in submarine cable construction, control of vessel navigation speed, and maintenance of continuous and stable vessel position. This undoubtedly puts higher requirements on the power positioning system.

The DP power system of “Qifan No.9” can not only meet the above requirements but also raise the anti-current level of the vessel to 4 knots; the 8-point mooring system can raise the anti-wind capacity to 10 levels, which can effectively ensure the stability of the vessel and the construction quality.

In addition, “Qifan No. 9” is equipped with U-shaped maintenance channels to meet the requirements of submarine cable maintenance operations. Equipped with the first domestic shipboard purification room can meet the technical environment requirements of 220 kV and above voltage level submarine cable joints on-site production. The flat hull structure can effectively reduce the draft depth of the vessel, which greatly improves the stability of the vessel and its ability to operate in shallow and intertidal areas.

As the most recognized label in the world, Made in China (MOC) is seeking a strategic upgrade. The “Made in China” column invites industry authorities and senior players to present their vision of China’s innovation path.