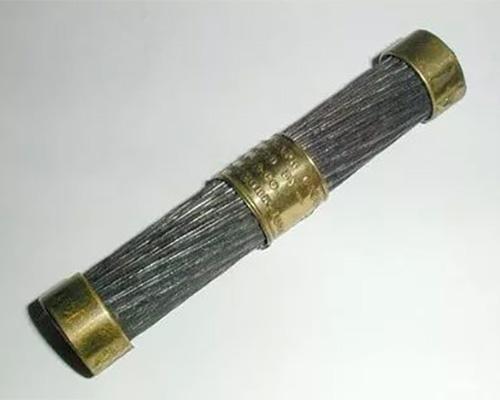 But in 1858, the first Atlantic submarine cable caused a sensation when it was completed.

In the 1850s, telegraph networks spread rapidly across Europe and the Americas. But submarine connections were a challenge.

In 1850, the first submarine cable between France and England, laid from the back of a tugboat, lasted only one day before it was broken by French fishermen. 1851 saw the construction of a better quality cable, and in 1852 the connection from London to Paris was completed.

But laying the cable in the Atlantic was a completely different challenge. Cyrus Field, an American, made his fortune in the paper industry and retired at the age of 33.

He raised money from public investors and won the approval of Samuel Morse, the father of the telegraph.

A 2,500-mile-long cable was brought to sea in June 1858. It was tucked away on two ships, as no single vessel could carry such a heavy fellow. The two ships sailed to the middle of the Atlantic, spliced the cable together, and drove in opposite directions.

The cable snapped three times, including one encounter with a whale. After the fourth attempt, the cable was finally laid perfectly.

Queen Victoria of England and President James Buchanan of the United States exchanged telegrams of victory. Hundreds of salutes were fired in New York and Boston. The Americans proclaimed that a new era of communication had been introduced.

Tiffany, a New York jeweler, bought the rest of the submarine power cable and sold it as a souvenir.

People optimistically predicted that the submarine cables, ensuring timely human communication, would lead to world peace. Many of the old prejudices and hostilities would be impossible. It was a little fairy rising from the waves, a pioneer of peace.

But the victory was only short-lived. Telegraphs sent by cable were so unreliable that they took 16 hours to deliver. The opening to commerce was repeatedly postponed. A month later, the cable failed. Some people thought the whole thing was a hoax. Little was known at the time about the electrical properties of the submarine cable. The project’s chief engineer mistakenly believed that the best way to send information over long distances was to increase the voltage. But this would gradually destroy the cable.

A scientific investigation followed. Lord Kelvin, a physicist, came up with a new electrical theory and worked with Field to build a new Atlantic cable, which went to sea in June 1865 and was completed in 1866. This Atlantic cable worked so well that Field paid off all his debts within a year.

Today, the laying of submarine cables is commonplace. News can cross the ocean in a matter of minutes. But the world’s wars have not diminished as a result. In the Austro-Prussian War of 1866, the telegraph was used to coordinate the movement of armies.

Today, propaganda bots on the Internet are brainwashing the population every day, while hackers are attacking each other all the time.

In 1866, the German engineer Siemens invented the world’s first high-powered generator for China. And China’s Taiping army was still conquering and dreaming of a heavenly dynasty. In China, there are too many strange dreams that deviate from the trend of the times, and when you wake up from the dream, it is time to be beaten.