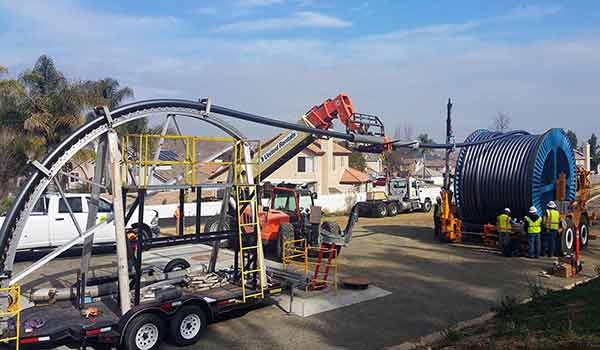 Daehan Cable has accumulated $300 million in orders in North America with an additional $24 million order from the U.S. branch of Korean cable manufacturer Daehan Cable. This is the highest since the company entered the U.S. market at the beginning of the 21st century.

The order received by Daehan is for a 230kV extra-high voltage underground transmission line project connecting a large solar power plant in the eastern desert region of California, USA.

With these two projects, approximately $80 million in new and renewable energy infrastructure projects were awarded this year, and in March 2022, Daehan Cable was awarded a project to connect a large offshore wind farm off the eastern seaboard to the power system.

Daehan said it hopes these achievements will play a positive role in the continued expansion of winning orders in the United States.

Among Other Things, Regarding The Use Of Solar Cables Used In Solar Power Plants

The cables used in systems for solar power plants can be roughly divided into two categories, DC cables and AC cables, which are classified as follows, depending on the environment and purpose of use

1. Series cables between modules and their strings.

3. cables between the DC distribution box and inverter.

Generally, the above-mentioned are DC cables, which are used more often in outdoor areas and are required to work normally under humidity, sunlight, cold, and ultraviolet radiation, and in some special scenarios, they are also resistant to acids and alkalis, and other chemicals.

2. Connection cable from the step-up transformer to the power distribution unit.

3. Connection cables from the power distribution unit to the grid or the customer.

The above-mentioned cables are AC load cables, which are used more often outdoors, and the selection requirements are the same as those for general power cables.

III. Most of the DC cables in solar power plants are arranged outdoors. The use of scene is located in a very harsh environment, according to the environment of ultraviolet light, ozone, temperature changes in the degree of drastic and acid and alkali chemical corrosion to choose the cable material.

If you use ordinary cables, working for a long time in a harsh environment will lead to the breakage of the cable sheath. It may even lead to the decomposition of the cable insulation layer, resulting in a short circuit and a fire accident.

What Are The Main Components Of A Photovoltaic Power Plant System?

Today, distributed photovoltaic power generation in Germany accounts for more than 80% of its power generation capacity. In Europe and the United States, it is not new to build PV power plants on your rooftop and become a power supplier to the grid company.

Recently, the EU’s “double reverse” has sparked a lot of debate in the PV industry. This “double reverse” makes the already exhausted photovoltaic industry worse. In this situation, some companies began to take the initiative to change and shift their market target. Many large PV companies are focusing on home PV power generation systems. In other words, this is a market with great potential for development.

So, What Are The Main Features Of Rooftop PV Power Plants?

Self-built and used in the vicinity 2. Grid access mode.

(1) The power station is close to the user, with low transmission losses, and high energy efficiency.

(2) No long-distance transmission, the grid transmission facilities construction investment will not increase.

(4) Use of existing rooftops without taking up additional land.