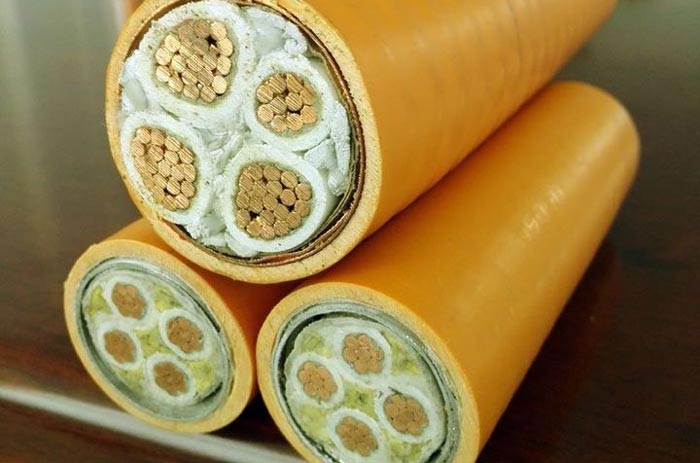 The durability and reliability of mineral cable are more advantageous than traditional cable. In addition, the mineral cable is also fire-resistant, mineral cable continuous working temperature of 250 ℃. It can supply power continuously for 3 hours at 950 °C-1000 °C, and can work close to the melting point of copper 1083 °C for short periods or extraordinary periods. Due to the excellent performance of the mineral insulated cable. Therefore, it is suitable for lines with a rated voltage below 1000V.

As all mineral cable is composed of inorganic materials, it will not cause a fire itself, it is impossible to burn or combustion, and will not produce toxic gases, even if there is a flame outside the burning, the cable can still work normally. After the fire is cleared, the cable does not need to be replaced, it is a real sense of fireproof cable. The fire line provides a foolproof guarantee, passed the test of IEC331 of the International Electromechanical Commission.

As the normal use temperature of mineral insulated cable can reach 250℃, IEC60702 stipulates that the continuous working temperature of mineral insulated cable is 105℃, which takes into account the terminal sealing materials and safety needs. Even so, its cross-sectional flow is still far more than other cables, because magnesium oxide powder has a better conductor coefficient than plastic, so the same working temperature, the cross-sectional flow is greater, for more than 16 mm lines, can reduce a cross-section, for places where human contact is not allowed, can reduce the cross-section of two.

As the cable uses low smoke halogen-free high flame retardant material for the sheath has high corrosion resistance (plastic outer sheath only in individual chemical corrosion occasions require), the conductor, insulation, and sheath between the three dense pressure entity. Therefore, it is not only protected from water, moisture, oil, and some chemical substances, and thus suitable for places where there is a risk of explosion and various explosion-proof equipment, equipment connection lines.

When the line is overloaded, the plastic cable will cause the insulation to heat up or break down due to over-current or over-voltage. For mineral insulated cables, as long as the heat does not reach the melting point temperature of copper, the cable will not be damaged. Even if the instant breakdown, the high temperature of magnesium oxide at the breakdown point will not form carbide. After the overload is cleared, the cable performance will not change and can continue to use normally.

Since the cable consists of inorganic materials, it does not get old and has a minimum service life of over 100 years. And the cable can be reassembled and reused, along with equipment shifting or line transformation.

Compared with the same rules of plastic cable, mineral insulated cable outside diameter is reduced by 50%, the weight is reduced by 30%, which can reduce the occupied space, but also easy to install.

As the cable components are inorganic, it has an effective neutron capture cross-section and maintains a high insulation resistance. Therefore, after being exposed to nuclear radiation, the electrical and mechanical properties of the cable will not produce any changes.

Since the cable component materials are all inorganic and do not contain any organic substances. Therefore, even if the cable is barbecued at more than 1000 ℃ or placed in a destructive flame to copper, it will not produce the slightest smoke, and no chimney elements and toxic gases. The cable is truly green protection, with no “secondary disaster” safety products.

Because the metal sheath of the cable has a certain strength and toughness, magnesium oxide in the cable processing process is highly compressed. So the cable suffers from bending, flattening, twisting and other deformation, the opposite position between the core and the sheath remains unchanged, will not produce a short circuit, and will not affect the electrical performance. In the case of cable, outer diameter deformation to two-thirds can still work normally.

As the cable is fully annealed, has a general plastic cable can not be compared to the bendability. The minimum bending radius is only 3-6 times the outer diameter of the cable and can be repeatedly bent many times.

(1) the cable’s superb resistance to fire

Whether in factories or buildings, the safety of electrical wiring is critical. According to national statistics, the cause of the fire, due to electrical wiring caused by the fire, accounted for more than 50%. The cable is both the main body of the line, but also difficult to protect the link. Therefore, the cable must not only have the ability to resist external flame damage, but also have its own characteristics that do not generate fire. Because the mineral insulated cable composition material is uniformly inorganic, the insulator magnesium oxide in the overload or short circuit will not produce open fire. Therefore, the mineral-insulated cable lines will never lead to a fire. If once the fire is started for other reasons, the cable in the fire is not only to be tested by the blaze, but also by the constant impact of other multi-falling objects. At this time, the cable does not produce smoke and toxic gases at the same time, can guarantee the normal start of fire equipment, fire extinguishing, and evacuation of personnel is the key to evaluate the line’s ability to resist fire.

BS6387 (British Standard) in the program is the real test of fire resistance of the cable in the disaster fire withstood. Due to the cable in, the fire is not free from outside interference. It will be subject to the firewater, fire off the material, and other heavy objects of the constant impact, we know that organic (plastic) cable fire resistance is achieved by the conductor and insulation between the mica wrapping tape. However, once the plastic fire-resistant cable fire, mica, and insulation will form a hard shell and carbon shell respectively. The carbon shell will be conductive in the presence of water, and the mica crust will fall off in the presence of water or another heavy impact. After a number of tests by foreign authorities to prove that can meet the BS6387 (British Standard) test can only have mineral insulated cables. Another mica-insulated fire-resistant cable (NH), can not guarantee the infallibility of power in the fire.