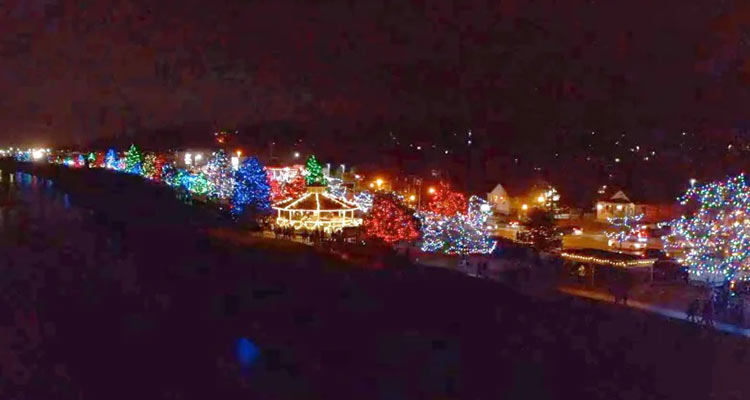 The Town of Riverbend’s Christmas lights display runs for one kilometer along the waterfront and contains approximately 52,000 lights.

More than 52,000 Christmas lights will shine again in Riverbend after a large amount of underground copper wire was stolen this summer.

New Brunswick Town Council has voted to proceed with the “Light Up Riverbend” display after the theft involving 3,600 meters of underground copper wire and 46 electrical boxes prompted town staff to review its future.

The restoration work is expected to cost more than $58,000.

“We put a lot of money into developing this program,” LeBlanc said in an interview Tuesday.” It’s been great for our residents. It brings people to our town. It has brought a lot of joy to the residents of Riverview.”

Tree lights, gazebos, and mini-covered bridges stretch for about a mile along the Petitcodiac River west of the Gunningsville Bridge.

A staff report presented to the town council said the community has spent about $165,000 to purchase and install the additional lights since the project began in 2016. Maintenance costs over the years have totaled about $50,000, partly due to vandalism but mostly due to weather.

Recent thefts prompted town staff to go to the council Monday to ask whether to abandon the display altogether or install new wiring.

The staff recommends continuing to use it.

A motion passed unanimously Monday asked the town to divert about $65,000 earmarked for the expanded display to restoration and stop its expansion until the risk of theft is reduced.

The massive June 16 incident was more severe than the Jan. 6 vandalism, when dozens of wires and cables were severed and strings of lights were pulled down. That restoration cost about $6,000.

The mayor said in January that the theft did not appear to be about stealing copper, as most of the wires were simply cut and left in place.

Workers inspect an electrical box along the riverbank after it was vandalized in January. (Shane Magee/CBC)
Several councilors expressed disappointment that the exhibit would not be expanded.

“I’m glad we’re going to continue to have these lights – the whole community loves them,” said Councillor Sarah Murphy.” It’s disappointing that it won’t be expanded to East River Bay, but hopefully, that will protect the longevity of the investment.”

Councilman Jeremy Thorne said whoever is doing this should be ashamed of themselves.

Shea said the town is aware of a significant amount of copper wire stolen from the area, including from a school and the Gunningsville Bridge.

“It’s not all about ourselves, or we’re not the specific target of the vandalism,” Shea said.

Vandalism temporarily cuts power to a massive holiday light show in Riverbend
The B.C. town has activated what could be the “switch” for the largest light show on the East Coast.
Staff said the town plans to replace the underground copper wire with aluminum, which councilors were told has about 75 percent less scrap value. aluminum was recommended by the construction industry and N.B. Power, Shea said.

Both incidents have been reported to the Codiac Regional RCMP.