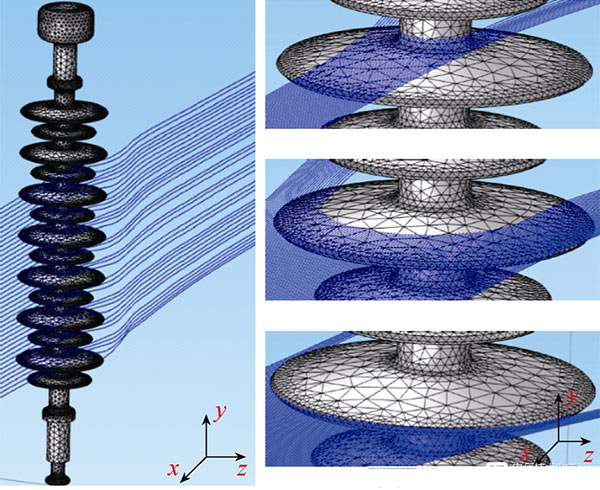 The impact of wire covering is mainly concentrated on mechanical characteristics. Therefore, studying the wire covering mechanism and establishing an ice-covered model, predicting its ice-covered growth has always been the focus of attention. Among them, the three-parameter model based on water droplets collision, capture, and freezing is the most widely used. The model pointed out that the growth rate of wire covering is determined by the collision, capture, and freezing efficiency of over-cooling water droplets on the surface of the wire. It also established a physical model that calculated the three parameters, respectively, and the calculation involved in the second streaming field and thermodynamic equation.

In order to improve this model, relevant research pointed out that the power field strength and electric halo discharge of the overhead transmission wire surface will affect the ice-cover form and rate. Consider the calculation model. Some studies start from the collision coefficient of water droplets on the surface of the wire, and the simulation calculates the effects of the effect of the electric field on the parameter. The results show that the electric field will increase the water drop collision range and the collision coefficient value of the surface of the wire.

The main hazard of the electrical insulator is the trip to the line brought by the ice flash. In the past, most of the research focused on the reduction characteristics of the flashes of the inside of the insulation. Researchers at the National Key Laboratory (Chongqing University) of Power Equipment and System Security and System Safety and New Technology, from the perspective of water droplets in the air, explore water droplets during the ice-covered process of insulators and collisions. It is affected by the DC electric field on the surface of the insulator.

Based on the principles of fluid mechanics and electromagnetic fields, a mathematical model of water droplets is established to comprehensively consider the role of airflow and electric field power. Perform stress analysis and numerical calculations on sports water droplets. Taking the composite insulator as the sample, the water droplets at different positions on the surface are analyzed by the changes in the power field power and the extent of the trajectory. And get the following conclusions:

1) During the ice covering process, the droplet in the tape-band water droplet in the radius area of the compound insulated skirt with the airflow will be able to be rapidly growing. It caused the water drop trajectory to offset and tended to collide to the position with a large strength of the insulator surface electric field. Increasing the unevenness of water droplets at different positions on the surface of the insulator and the unevenness of ice-covered.

4) Relatively without charge, under the condition of drying and dry growth, the surface of the compound insulator is rougher, the ice-covered growth direction is diverse, and the percentage of the ice covering rate under the radius of small wind speeds is more than 30%. Under the condition of wet growth, the electric field has a small impact on the ice-covered rate of compound insulators, but it is easy to cause curved growth.