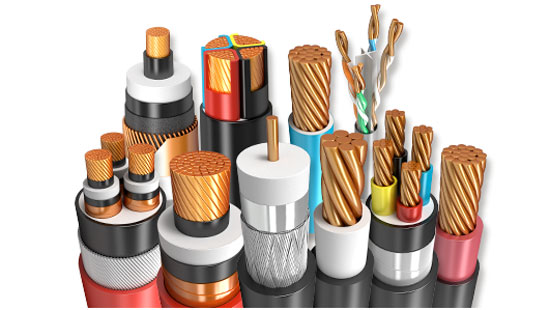 Generally, power cables are within 5 cores. They are generally used for high-voltage power. The number of cores of control cables is relatively large. Sometimes customer requirements are different, generally to 37 cores, but there are more cores.

The commonly used cable classification is divided into five categories:

(1) Wires and bare conductor products: refer to only conductors without insulation and other structures. Such as: copper, aluminum and various composite metal single wires, various structures of overhead transmission stranded wires, flexible wiring, shaped wires and profiles, etc.
(2) Magnet wire: In the form of a winding, a magnetic line of force is cut in a magnetic field to induce current, or a wire that generates a magnetic field with current is called a magnet wire. Such as enameled wire, fiber wrapped wire, inorganic insulated wire and so on.
(3) Power cables: Wire products used to transmit and distribute high-power electrical energy in the backbone of the power system, called power cables. Such as: plastic cables of various voltage levels, oil-impregnated paper cables and non-drip, etc.
(4) Communication cables: cables used to transmit audio and various telecommunication information above audio. Such as: local telephone cables, long-distance symmetrical communication cables, coaxial communication cables, telephone equipment cables and data cables, etc.
(5) Wires and cables for electrical equipment: Wires and cables for power connections that directly transmit electrical energy from the power distribution point of the power system to various electrical equipment and appliances. Such as: wires and cables for electrical connections and control signals in various industrial and agricultural equipment. This type of product is widely used and has a wide variety of products, and most of them must combine the characteristics of the equipment used and the environmental conditions to determine the structure and performance of the product.

The cross-section of the control cable generally does not exceed 10 square meters, and the power cable is mainly for power transmission, and generally has a large cross-section.

Due to the reasons mentioned above, the size of the power cable can generally be larger, as large as 500 square meters (the range that can be produced by conventional manufacturers). And there are relatively few manufacturers that can make the larger cross-section. While the cross-section of the control cable is average. Smaller, the maximum generally does not exceed 10 square.