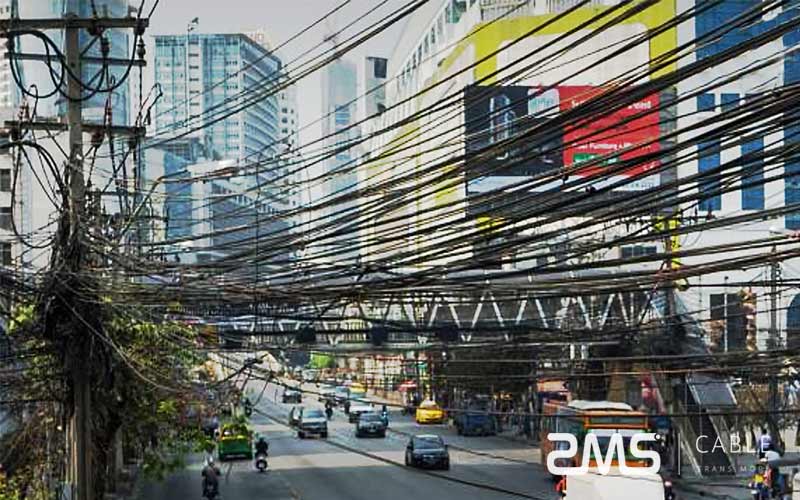 The Bangkok City Government (BMA) may cancel the project to move all overhead and telecom cables underground as most telecom service providers shun the project due to its high investment cost, estimated at around 19 billion baht.

Bangkok Deputy Governor Wisanu Subsompon said at this stage, the city government has instructed its investment arm, the project owner Krungthep Thanakom, to slow down its work as the telecom service provider has shown little interest.

If the project is to be completed, the municipal government expects the National Broadcasting and Telecommunications Commission (NBTC), the telecommunications regulator, to also share the cost, he said.

To date, cables covering 7.2 km on some roads in Bangkok have been laid underground by the BMA at an estimated cost of 140 million baht, but the total distance of overhead cables in the capital is about 2,450 km.

Meanwhile, the Metropolitan Power Authority (MEA) has put its cables separately into the underground cable pipeline for a total distance of 62km and expects to complete another 12km of road work this year.

It plans to apply to the Cabinet in the next five years to relocate the cables, a distance of 77.3km, after which all poles will be removed.

The cable project is one of BMA’s ambitious plans to beautify Bangkok’s environment by removing cable barriers.

Why Are More And More Cables Being Placed Underground?

With the rapid development of the urban economy and the improvement of the quality of urban life, underground power cable has become a trend in the new century and new era. It has and will certainly play a beneficial role in beautifying the urban environment and enhancing urban functions and producing a new practical effect. Underground cables should also reflect the high level of comprehensive social and economic development of a city, and can also measure the high degree of modern and scientific development of a city.

First, It Can Enhance The Reliability Of The Urban Power Grid

Because the aerial insulated cable is exposed to the air, the wind, and rain, it is very easy to occur cable to age, insulation layer phenomenon is very easy to be corroded by acid and alkali gas in the atmosphere and water, is the overhead cable has a lot of dangerous hidden trouble. Therefore, the use of overhead cables is very necessary, is also extremely important, underground cable is a way of laying with higher safety.

Exposed a large number of poles on the edge of the road in the city, and cannot avoid the overhead lines bump lever of traffic accidents, and also often crane touchline, high altitude parabolic damage accidents, the kite line thereof, is more likely when the severe weather such as storm, heavy snow caused serious damage to the power supply and communication networks, the cable loss and accident, Will almost directly lead to the interruption of power supply and communication line rate.

For example, in France, a powerful storm in December 1999 caused the severe failure of 8% of the high voltage and ultra-high voltage transmission lines. The power interruption lasted for 15 million users per day, but it took up to 6 months to repair all the lines, and the total loss was as high as 1.3 billion euros. Hangzhou, China, also experienced a strong typhoon in August 1988, leading to many trees down the overhead line, resulting in the rupture of the cable line, triggering a large area of power outage in Hangzhou, for more than 10 days, the loss is quite heavy.

In a general sense, the incidence of accidents and failures on overhead lines is much greater than that on underground cable lines, about 10 times as much. Therefore, the use of overhead lines into the ground in the city is very necessary, but also particularly important, underground cable is complete can bring the reliability of power supply to the city, safety is more carefree.

Second, It Can Enhance The Transmission Capacity Of Urban Lines

Usually overhead lines to another tower, but buried underground cable lines, can reach many loops, underground high voltage cables generally have a more efficient copper conductor, so that he is efficient delivery of electricity.

In addition, underground UHV cables generally have more efficient copper conductors and can operate at lower temperatures than overhead transmission lines. This feature enables the delivery of electricity to end-users as efficiently as possible and is particularly important for renewable energy generators and low-carbon generators over long distances. It can make a valuable contribution to reducing these transmission losses and greenhouse gas emissions.

Third, it can eliminate visual pollution and beautify the urban environment

Because the huge cobwebbed overhead line of the city has largely destroyed the beauty of the city and the visual effect of traditional and modern buildings, the overhead line can return the city to a pure place and make people visually produce a comfortable aesthetic feeling.

Fourth, The Use Value Of Urban Land Can Be Improved

Taking the way of buried, can better reduce the dangerous accident, avoid because of the accident of telegraph pole, lead to personal safety accident.